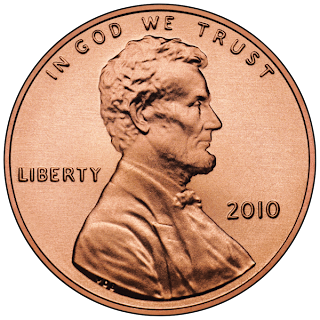 A penny, the lowest form of money, is so insignificant that some think it has no value at all.  People leave them in cups on counters at convenience stores to be shared by others, and toll booths refuse to accept them.
When I see and feel a penny in my hand I immediately think of my grandmother.  As a boy growing up on the streets of New York, my grandmother would stop anywhere, any place to pick up our smallest monetary unit.

God forbid she would stoop down into the gutter to retrieve a brownie when my friends were around.  Heaven save me when we were crossing Flatbush Avenue and she would spy one red cent straddling the center line as cabs, buses and trucks whizzed by and she squatted down to add another to her purse.

She would turn to me like clock work and tell me about my grandfather working twelve hours days during the depression for not much more, saying “We might just need this penny some day.”
Many years have passed since I held Gram’s hand crossing those busy New York City streets.  Now, when I walk with my daughter and I see a penny on the ground, I find myself like a moth around a light bulb on a hot August night, bending down and picking it up.

“Honey, you’ll never know when we might need this penny” and slip it in my pocket.
My Grandmother, Regina Guilfoyal Scholl Schafer  would have been 106 on September 8, 2011 she died in 2002. She is always with me.I originally wrote this in the Summer of 1996 at the TN Governors School of Writing.
Posted by Unknown at 4:58 PM No comments:

This was not just idle bad mouthing. This was the long term plan, to take American jobs out of the country and privatize all public sector jobs. If you are a worker and you get payroll taxes taken out of your pay and you vote Republican, you are a bloody fool.

Do you think your pension or employment is secure? Cops, Fireman, Teachers, and all public sector workers are at jeopardy because state tax collections are substantially down and Republicans want to privatize your job.

The Scumbaggers who believe the Stimulus did nothing are so bloody wrong. It saved the jobs of 3+ Million people. The jobs which were saved by the Stimulus are the same jobs that are in jeopardy next summer.

The Stimulus worked, problem was it was not big enough and it did not attack the root problem of job creation. The Republicans have been totally wrong in their assumption that the Rich are the Job Creators. The Rich keep their money in their investments. None of which created any jobs under George W Bush or Barack Obama.
Since the New Deal, America grew to be “The World Power,” on the backs of the American worker. The Hoover Dam, The George Washington Bridge, The Bay Bridge Tunnel and the Interstate Highway system are all examples of what American workers can do when the Government takes the lead. The more the Government takes the lead on job creation the better off the country.

The Republicans are so small minded. They are even knocking the vision of fast trains and solar power as pipe dreams and foolish. This is the same mentality that believes in creationism, and our weather is just nature way.


The only way we will get out of this mess is by restoring America to its greatness. America has to build its way out of this hole. Not shrink back into the dark ages. The Republicans want to take us back in time to an America that is seeped in racism, greed and poverty.
At no time in American history did the country’s middle class grow bigger and stronger than in the years from 1935-1970. The middle class grew out of the “Works Programs” of the 1930’s. As Government sponsored building programs took hold, then and only then did the private sector come into the mix as investors, sub contractors and services for the workers and the new communities created by the projects.

America is at a cross roads. Do we take the path of The Republicans, the path of anti science, intolerance, close mindedness, racism and small thinking? Or does America build its way out of “The Great Recession” and boldly reclaim America as the Greatest Democracy on the Planet. I believe the choice is easy. I want to live in an America that honors the American Worker. I do not want to live in an America where more and more Americans are pushed into poverty by the profits of the Rich.

Power to the People!

Posted by Unknown at 1:23 PM No comments:

Yesterday’s drive home was terrible; my “normal” hour drive was doubled by a three car pileup. As I sat on a section of the Eisenhower genius I noticed the couple in the car in front of me was pointing at a very large bright canary yellow truck. On the back window of the truck was written in very large yellow letter
“FIGHT SOCIALISM.”
There was another bumper sticker proclaiming to the world that the person who owned the truck did not vote for Obama and "are we all happy now" or something to that effect.  As my car crept slowly past the truck I could not see into the “Alabama” tagged vehicle through the blackened tinted glass.
I was hoping to see if the inhabitants were of Social Security age and ask them if they liked their checks every month? Or if they liked the government run medicare system they probable used. But sadly I could not engage the driver in any conversation as he sat in his locked up air conditioned machine.
I started thinking about a running conversation I have been having with friends about the Ancient Jewish custom of redistributing the wealth of the tribe every 50 years. This topic has led to discussions about what is really going on in America today.
One friend, a deeply committed follower of Jesus Christ shared with me “Jesus for President” by Shane Claiborne and Chris Haw 2008.

Here, the authors explore the exact same concept in what they call “Jubilee.” Quoting the Old Testament, Jesus is said to have laid out the framework for his ministry.
“Just like Isaiah had done many years before, Jesus called upon the great economic tradition of the Torah.”
In the Sermon on the Mount, the authors’ state, Jesus urged his people to remember the Sabbath laws and their alternative economic system of sharing, debt cancellation, and land redistribution. The vision of “Jubilee” is one of liberation of the entire world’s poor and broken people of the “Empire.”
If you really look close at the teaching of Jesus you see a man committed to the poor, weak and less fortunate of society. Calling on the redistribution of wealth is a very radical idea in any society. It sure sounds like Socialism to me.
Karl Marx and Friedrich Engels in their collaborations used what they thought of “heaven” as their model for their “new” society.
Why the fear of Socialism? If Jesus called for Socialistic ideas what are people so afraid of? Is it the idea the government is going to come take your things? Or take your wealth?
Churches around the globe preach the teaching of Jesus every Sunday why is it so hard to believe the man they worship probable was closer to a Socialist in his thinking than a Republican?
I don’t know what the answers are to our political and economic situations, but this form of government and economic system is not working. Since the industrial revolution and the globalization of banking and currency our political and economic institutions have let the citizens of the world down.
The world’s economies are on a constant roller coaster ride of boom and disaster, feast or famine. Throw in a constant state of war “and look what you get another day older and deeper in debt. Saint Peter don’t you call me cause I can’t go, I owe my soul to the company store.”
The story of “sixteen- tons” is not too far off for most of the working poor and middle class Americans. The latest economic reports did not put a smile on many of those same Americans who have been out of work a long, long time.
Where do we go from here? Do we strip the power of the Federal Government down to the defense of the country and nothing more as is the suggestion from many far right wing Republicans in Congress and in State Houses? Or do we be bold and step outside the box on a new recovery based on good jobs and decent wages for American workers.
Do we continue to act like many on the right and let greed, power and racism take over the will of the people? Or do we take a moral stand and tell our leaders enough is enough.
This form of Capitalism is Not working. It is obscene that 400 Americans own more wealth than 160 Million Americans. It is obscene that 25% of the top CEO’s bonuses where larger than the taxes paid by the companies they work for. It is obscene that Millionaires pay fewer taxes than the average American teacher.
This system of greed is not working for the majority of Americans. Like the story of "Jubilee," Jesus was asking to turn to a different almost shadow economy based on values of the past. Maybe we should listen.
Posted by Unknown at 11:46 AM No comments: