Casey, Me and a Sunday Afternoon

The nostalgia of 50 years of New York Mets baseball had me thinking of the first time I read about the Mets on the back of the Daily News or Post in 1962. In those prehistoric days of black and white TV, newspapers were the main source of information and in the sports world, ESPN was a figment of every sports nut imagination.

A Race of Clay

Into the darkness he was sent by parents'
Who were ignorant hm, hm
Tied down to his mother's strings
Unable to be anything hm, hm
Puzzled by the things he hears
The father thinking work comes first
Ain't got the time to quench a thirst
No, no, no, no, no, no, no, no,
No, no, no, no, no, no, no, no,
Once he was a child, a beautiful child
A child of clay shaped and molded
Into what he is today
But who is to blame for this child of clay
- Jimmy Rodgers
I watched Doug Blackmon and Sam Pollard’s documentary “Slavery by Another Name” and thought, African Americans never had a chance to become fully entitled and vibrant members of the American Society.  As I watched in shock and horror, I realized, I really did not know what happen to the ex slaves of the Southern Gentry.
Being raised in Brooklyn of the 50’s and 60’s I never experienced Segregation. I had African American classmates for as long as I can remember. My neighbors were from many lands, Ireland, Italy, Puerto Rico and Africa. I had black friends, I ate in their homes, and they ate in mine. I was never affected by racism and hatred.
Of course there was racism in Brooklyn; just because I was insulated by it does not mean it was not present. There were racial incidents and I am sure racism in many forms, but none like what was happening in the South. There were no “white only” or “black only” signs on public bathrooms, or sitting areas in restaurants or train and bus stations. African Americans in New York City did not have to sit in the back of a bus or give their seats to white people and there were no lynching or terrorism of Blacks.  They were free to move about just like everyone else. Places like Harlem and Bedford – Stuyvesant were vibrant centers of African American experiences and economy.
African Americans living in the South were brutalized and terrorized up until WWII. Southern Whites had an exaggerated hatred of Blacks. Once the Union Army left the South, every Black man, woman and child was held captive by fear and “Jim Crow” Laws by the hands of White Southerners.
African American men were rounded up and forced into slave labor camps as a result of systematic changes to local laws which  basically outlawed being Black in the Southern States.  Boys as young as 12 and 13 were stripped of their childhood and forced into slave labor and girls and women were also trapped in a system of hatred and fear. An estimated 800 thousand Black men, women and children were forced into servitude at the hands of white men and the coming industrialization of the South.
At the end of the Civil War there were 4 million ex slaves and 4 million, just as poor white people. Through the American Dream those 4 million white people grew to become 40 million white middle class people. Today less than 6 million African American families can call themselves “Middle Class.” With more than 52% of all Black Americans still living in poverty compared to 36% of White families in poverty. 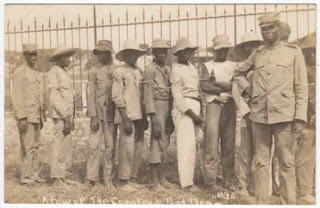 As Southern Industrialization grew, so did the need for cheap labor and Southern White Business, Political, and Religious leaders systematically turned the white public’s view of Blacks from loyal, hardworking and dutiful to evil, subhuman and dismissive. This was done by public humiliation, lynchings and suppression.
I was once at an educational conference and the lecturer a principal from Harlem told the audience his school, an impoverished middle school with many students having social and behavioral problems. He stated there was one boy who every teacher knew and who every teacher had a run in with. He was the talk the teacher’s lounge daily and at staff meetings his name always popped up.
In one meeting the boy’s homeroom teacher said she was fed up and it was only October. The Principal instructed the teachers to try and turn the negativity around by pointing out the good things the boy did on a daily basis. Sticky notes would be placed on the lounge refrigerator door for the positive behavior exhibited by the boy.
“Mario opened the door for me as I was coming into class.”
“Mario answered a question right in class.”
“Mario raised his hand and asked a question.”
Soon the refrigerator door was plastered with sticky notes and soon the opinion of the teachers of the boy had changed. The boy’s behavior improved along with his relationship with the teachers.
The simple acts, of positive reinforcement, how powerful, just think what could happen if there was a systematic diabolical plan to humiliate, and degrade one whole race of people. That is exactly what happened. Southern ex slave holders wanted their assets back one way or another and putting black boys and men in prison by any means for any trivial matter was the way to do it.This changed public opinion of African Americans and especially African American men and created the "rightness of racism." Its OK to treat Black people badly because they are bad people. They are criminals, untrustworthy and worthless.
After generations of physical and psychological abuse at the hands of white people you are left with 10.4% of the entire African-American male population in the United States aged 25 to 29 incarcerated, by far the largest racial or ethnic group—by comparison, 2.4% of Hispanic men and 1.2% of white men in that same age group were incarcerated. 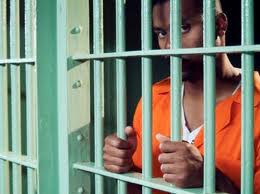 Read more: Prison Population Exceeds Two Million — Infoplease.com http://www.infoplease.com/ipa/A0881455.html#ixzz1mk5O1RTP
Unlike the forced slavery depicted in “Slavery by Another Name,” inmates are not forced into work in fact most of the current inmate population like having a job and making a little money but, someone is making a lot of money on their incarceration. The Prison Industrial Complex is not shrinking its growing. We now have over 2 million people in Federal, State and Local prisons. More than half of those incarcerated are for drug offenses.
New York City politicians have found a new gimmick to shake money, time and dignity out of people of color in their money hungry attempt to “Gentrify” the city. NYPD has become a money maker for the Bloomberg Administration using trickery and racism to garnish the Cities budget. 50,000 people were arrested in NYC last year for simple possession of marijuana. Those arrested are by far are people of color.
http://marijuana-arrests.com/nyc-pot-arrest-docs.html
America is still incarcerating black and brown boys and men at an alarming rate this after being born and raised in poverty and like, the southern black men of the past, incarcerated for trivial offenses to supply slave labor, NYC makes you pay for being a man of color, unemployed and poor.
Our society has a choice, like the commercial said, do you want to house, feed, and care for millions of our citizens or do we want to educate, help and mentor the future of our country.  We cannot keep feeding money making enterprises designed to keep people in poverty and isolated from the main stream of society. Every American should have a fair shot at being a viable member of the American experience.  Fairness is the American way; it’s what makes us different than any other land.
Posted by Unknown at 1:55 PM No comments: