Growing up in Brooklyn in the 1950’s was magical and during Christmas it was spectacular. My mother was a switchboard operator for a Wall St. brokerage firm, Garvin and Banter. She was a real life Lil Tomlin character answering the phone and transferring calls. She made $2500.00 in 1958.
At the Christmas season my mother would take a part time job at Abraham and Strauss a department store in downtown Brooklyn on Fulton St. She would work every November and December, Monday thru Saturday, right up to Christmas Eve night to make the money used for the Holidays and Christmas. That and a Christmas club savings account that she put money into during the year paid for all we wanted.
My Dad was not around, I never knew him. Gram owned and ran the rooming house we lived in at 207 Berkeley Place. My Sister Dawn, Mom, Gram and me. That was my family.  “Gram” as I called her took in tenants to pay the mortgage on the four story brownstone. She was able to buy the house after my Grandfather died in an iron work accident in 1949. She used the little insurance money she was awarded after his death as her down payment. She paid $21 thousand dollars for the home in 1953; I was two when we moved in. We all lived on the first floor and the tenant’s rooms were upstairs on the next 3 floors.
There was not a great deal of money but I never felt poor. I lived in this wonderful home on a tree lined street a block from Prospect Park in the heart of Historic Park Slope. I never went hungry and the two women who raised me worked tirelessly so my sister and I wanted for nothing.
Everything was a tradition. We went and bought our tree the week before Christmas.
We would go have Chinese food for dinner and afterwards we would walk down to 7th avenue to buy our tree from the Congregational Church. It was such a fun time. The trees would be standing up on the street with Christmas lights strung about creating an outdoor market. There was always a burning drum for warmth and light. People would be picking out trees, and the workers would be trimming bottoms and tying up the trees for customers to carry home. We would pick out our tree and the four of us would carry our tree home.  The tree would go up after a day or two and we would decorate it together, the four of us. My grandmother would have gone to the liquor store and bought a bottle of Rye and the two of them would drink Manhattans and sing.
In grammar school at St. Augustine’s I sang in the all boys choir. On Sundays, the 20 or so other boys and I sang at 11 o’clock Mass. At holiday season time we practiced for months the tunes to be sung at Midnight Mass on Christmas Eve.
In those days the Catholic Mass was still in Latin and we sang the hymns during mass in Latin and then after the service we sang Christmas chorales in English for the congregation. Dressed in red and white robes,  angelic is only word that comes to mind to describe the troop as we marched into church to start the procession of Mass.
St. Augustine’s was always packed. People of all ages crammed into the Gothic structure. High Mass Christmas Eve was not only exciting it was long; many of the younger children in attendance would be sleeping soon after arrival. Congressmen, Governors past and present would be in attendance. The Old Catholic money of the Parish was always on show. Candles, incense, and the smell of pine trees fragranced the church. The stained-glass and lights shimmered as the Pastor led the Mass and the petitioners sat listening to the sounds of Christmas.
After Mass I would race to meet my family outside of the church. My mother and grandmother would always be dressed as if going to a ball. We would walk the 4 blocks to home and when we arrived Santa had already been there. The tree would be lit and glowing and mounds of wrapped presents awaited.
We were allowed to open one gift and then Gram would make breakfast. Eggs, pancakes, bacon were the norm. We would eat and I would race back to the living room and the tree. It would be 4 or 5 in the morning before I would fall asleep exhausted from the nights events.
Christmas was magical, and loving. My Mother and my Grandmother instilled in me that Christmas was not just gifts, it was a special time of family, of love and of caring.  Those memories seared in my brain in my soul. I was always grateful for all I received and always reminded there are people, families around the world who have nothing and I had so much and still do.
Merry Christmas and Happy New Year
Posted by Unknown at 12:49 PM No comments:

I was asked what I thought were behavioral qualities of an Effective Teacher. These are my thoughts after my own reflection on this semester and my own students.
Building Relationships and having fun in learning. 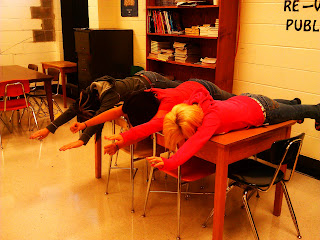